Is my child's speech lazy? 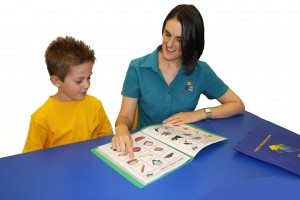 Often parents who bring their child for a speech assessment ask “Is my child just lazy?” For example the child may say ”tat” for cat. If the parent gets down face to face with them and says “watch me c- at”, the child may be able to say “c-at”. This does not mean the child is just lazy when a few minutes later they say “tat” again. There are a number of steps in learning a new skill and the child is only part the way along.

The first stage is called “unconscious incompetence”. This means a skill is done incorrectly but the person does not know they are not doing it the right way. At this stage the child cannot make the new sound and does not realise that they are not saying the sound in the same way as the adult.

The third stage is called “conscious competence”. Here the skill can be done with lots of thought and effort. This means the child can make the new sound but they need to break it down into steps and try very hard. The child above has moved to this stage when they are able to copy the parents model of the word. Adults may best understand this in terms of learning to drive a car. This is the stage where you have the car moving but you have to think about each step, what you are doing with your hands, feet and eyes and you have to concentrate very hard.

The fourth stage is called “unconscious competence”. This means that a skill can be done correctly without even thinking about it. This is when you can drive the car while listening to the radio and thinking about what you want from the shops and you do not even realise that your hands, feet and eyes are doing what they need to do. For the child above this will be when they can say the word correctly without having to think about it. Speech pathologists call this “transfer into conversation”. This means the child has learnt the new sound to a level where they use it in their conversation all the time without having to think about it, be reminded or corrected.

When a child does not say a sound correctly they are not being lazy, they have just not reached the level of having transfered the sound into conversation. They are still in one of the earlier three stages. This can be hard for adults to understand as we learned speech sounds so long ago that we use them easily, without thinking and probably cannot remember the time when we could not do this.

Speech pathologists help children reach this final stage of saying sounds correctly by moving children through a number of stages. They ask parents to help children practice at each of these stages because like any skill, the more practice, the quicker the progress. Playing games and activities as you practice means kids want to practice more and so learn quicker. Using modelling to help your child be more aware of the sound in everyday activities also helps them reach the final stage more quickly.

The stages for learning a new speech sound are:

1. hearing how the new sound is different from the old sound

2. saying the sound by itself

3. saying the sound with a vowel sound

4. saying the word at the beginning, middle and ends of words

5. saying the sound in sentences

6. saying the sound in longer units such as stories or games

7. saying the sound all the time in conversations

The Talking Matters website has lots of information about speech development and what to do if your child needs help to develop their sounds.