Learn by playing? Imagine that!

Posted by Talking Matters on 6 June 2015 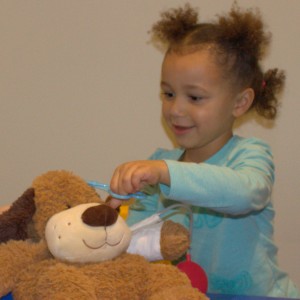 It looks simple, but it is also so valuable. Kids really do learn lots and lots of skills just by playing. If parents can take time out from their busy lives to play too the learning will be even better and so will the relationships.

Imaginative play or pretend play is vital for developing language, thinking, and social skills. As children grow and develop the type of play they enjoy changes too. Providing the right kinds of play opportunities for your child’s age and stage of development can greatly enhance their learning and skill development. Imaginative play begins in most children between the ages of one and two years but may develop later in some children with special needs.

Imaginative or pretend play is also called symbolic play or fantasy play. Children pretend that an object or action is something else, such as a doll being a baby, or climbing a tree is exploring a jungle. As children develop they begin to use socio-dramatic play which is pretend play with others. This play is particularly important for developing social skills, higher level language and thinking skills. It might include playing “families” or “schools” or acting out roles such as pirates or princesses. 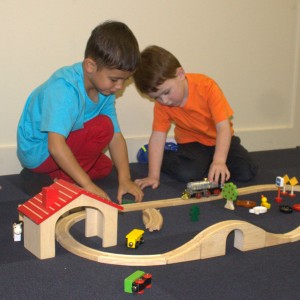 Pretend play involves understanding other people. Pretending to be another person whether it is mum or dad, a baby or a ballerina, a princess or a pirate involves thinking about another person’s role, how they feel and act and how they see the world. This develops a child’s theory of mind. Theory of mind is a higher level thinking skill important for learning and social development which can be challenging for children with special needs to develop. 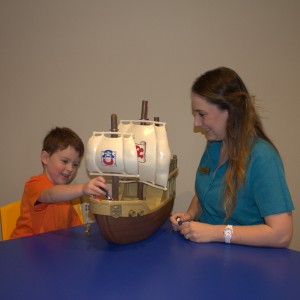 Pretend play allows opportunities to develop language, thinking and social skills.When children play together they learn to negotiate, explain, share, take turns, problem solve and respond to the comments, actions and emotions of others. 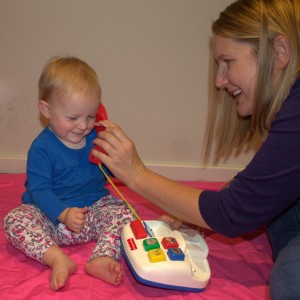 Toddlers of 10 to 18 months begin to show an understanding of how objects are used and copy the actions they see others do. They may use a brush to try to brush their hair or try to put a key into a door. They may begin to combine two objects together such as stirring with a spoon in a cup but they do not yet use objects to represent something else, such as using a block to stir. Most pretending involves the child's won body, such as pretending to drink from a toy cup, or putting a dolls hat on their own head. They like to copy what they see adults do and will copy you in play if you play together. They are also beginning to do single actions with a doll or teddy such as giving them a drink or a hug, but they can't yet string a series of actions together. 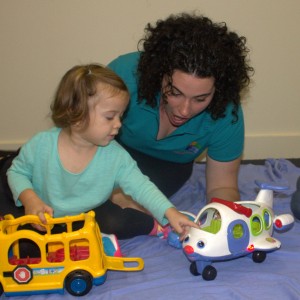 Two year olds begin to do true pretending where they imagine that things are “real” such as eating pretend food. They also begin to pretend that an object is something else such as pushing a block along, making car noises and pretending that the block is a car. They can “imagine” objects that are not there such as putting a pretend hat on a doll. They can also pretend that they are something else, such as “being” a character such as a mum or a baby. Themes in play at this age tend to be things that the your child sees everyday, such as routines of meals, bathing and bedtime. They begin to string a number of actions together and to use objects to stand in for other things, such as feeding a doll a block as an "apple". Your child may ask you for things to help with their play. They will play alongside other children and may copy what they see others do as they play. 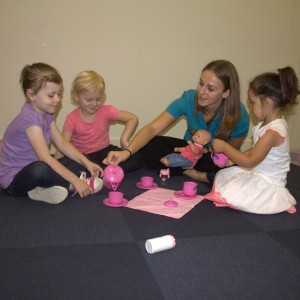 Three to four year olds begin to combine actions and objects to act out scenes. They use a mixture of people, real objects and imaginary objects to act out sequences of actions and whole scenes such as a tea party, caring for babies or going to the petrol station. Play scenes may be based on things that the child has experienced such as going to the doctors or on things they have not experienced but seen in movies or stories such as a fireman rescuing people. They are able to string a series of actions together in a logical sequence and they may have a plan or story line to their play such as sailing to an island and digging up a treasure. Children learn to take on a role and play a character. 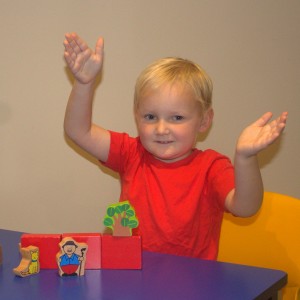 Allow time for pretend play. As parents and educators we are concerned that our children learn the things that are seen as important for schooling such as letters, colours, shapes and numbers so it is tempting for playtime to become “teaching time”. Allowing children to play freely is also important. Screen time takes up more and more of a child’s day so make a regular time to turn off the TV, iPad and computer and allow your child to play. 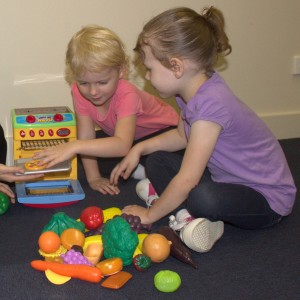 Provide materials for pretend play. Pretend play toys can be inexpensive. You don’t need to buy the worlds best cubby house or a ride on motorised sports car. A cardboard box can be both a cubby and a sports car for free and tomorrow it can be something else. 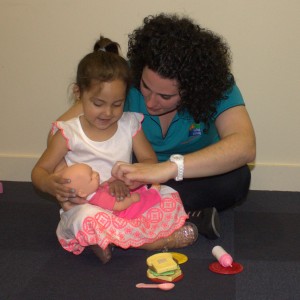 Need support for your child? Talking Matters provides assessment, diagnosis,therapy and support for children with a wide range of needs including developmental delays, learning and literacy challenges, speech and language delays, motor skill and sensory issues and children on the autism spectrum and their families.We are providers under the NDIA. We provide speech pathology, occupational therapy, social skills and play skills groups. We provide services in local schools and our disability consultant can help teachers support children who are experiencing difficulties in school. To find out more about our services and our team visit our website.

Our website has a range of downloadable information sheets, printable activities and useful links. To connect with our community of families, therapists and educators join us on Facebook, Twitter and pintrest.