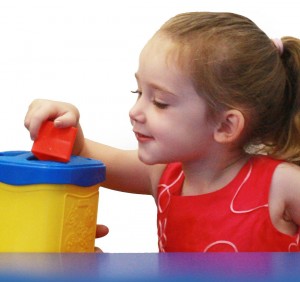 Sometimes it is hard to know when to be concerned about a child's speech and when to "wait and see". Often parents are given different advice by well meaning people such as "boys are slower" or "all kids are different". Often someone will report knowing a child who "didn't talk at all until they were four and now they are fine". Parents are often told not to "compare kids" with others. So how do we know when to be concerned?

Researchers point out the value of early intervention and delayed speech in younger children is known to put kids at greater risk of learning, social and behaviour problems later on. So when is there enough reason to seek support or advice for your child's speech?

Toddlers do vary in the rate at which they develop speech and language skills. Often girls develop somewhat quicker than boys, and the first child in the family may be a little more advanced than their siblings. By the age of two years though there are clear guidelines about when to be concerned. Research shows that by the age of two children who do not use at least 50 words and combine at least two words together into simple phrases are much more likely to have ongoing difficulties if they do not receive support.

Parents often ask "How can you do therapy with a child who is only two?". There are an number of elements to this question.

What about older children who talk but don't sound quite right? Will they just grow out of it? Children develop speech sounds over time and children reach an adult level of speech at around 7 to 8 years. Sound development follows a consistent pattern for most children and most can be understood by strangers by three years of age. If you are concerned about your child’s speech development an assessment by a speech pathologist can tell you if your child needs extra help and what you can do. Speech difficulties can lead to later difficulties with learning and social interaction but professional support can help kids overcome their speech difficulties and avoid later problems.

Typical ages for sounds to develop are:

An assessment is recommended if your child:

Children also develop language skills over time and in a predictable pattern. Language skills are vital for developing social interactions and for later reading and writing skills.

If you are concerned about your child's speech and language development, seeking advice and support can set you on the path to giving your child the best chance for future success.

Best of 2016!
Speech pathology FAQ
All about Language
Active communicators