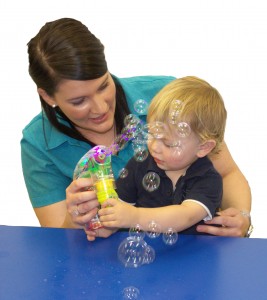 What is a "speech disorder" or "phonological disorder"? Each language has a set of rules about how speech sounds are used which speakers of that language learn with even realising it.

Young children take time to develop the rules of how to use speech sounds. As their vocabulary grows and they learn more and more words they will often develop rules to simplify sounds and words as their system is not developed to an adult level. An example of a common rule children use to simplify words is called “reduplication” where the same syllable is repeated, such as changing “baby” to “bubu” and “mummy” to “mumu”. Another is called “fronting” where a sound made at the front of the tongue is used in place of a sound made at the back of the tongue, so “car” becomes “tar”. Many of these rules are a part of normal development and children gradually grow out of them. These rules are called “phonological processes”. A child who takes longer to grow out of these processes is said to have a “phonological delay”.

Some children use rules that are not commonly seen in typically developing children such as “initial consonant deletion” leaving sounds of the beginning of words such as “at” for “cat”, or “backing” using a back sound in place of a front sound such as “kea” for “tea”. This more unusual pattern of development is called a “phonological disorder”.

Children take time to develop the full range of adult speech sounds. They begin at birth or even before by listening to the sounds of the speech around them. They practice these sounds through babbling which begins at around 5 months with a range of sounds from all languages. Babbling develops to sound more and more like the language the child hears as they refine their sound system. By 12 months the first real words appear. By two years most of a child’s speech can be understood by their parents and by three years by a stranger.

Typical ages for sounds to develop are:

Sometimes things such as ear problems, developmental delay, prolonged illnesses or inherited factors can effect the child’s development and use of speech sounds. Children may develop more slowly than expected, may not follow the typical pattern, may have difficulty with a particular sound or group of sounds or may leave sounds out of words altogether.

Speech pathologists can often help children’s speech improve more quickly by targeting a number of sounds effected by the same rule at once, rather than working on one sound at a time. This can be an effective way to make children’s speech clearer. If you are concerned about your child’s speech a speech pathology assessment can help you work out what is best to help your child.

For more information about speech, language and learning or to find out how speech pathology can hep your child, check Our website.