Posted by Talking Matters on 6 September 2012 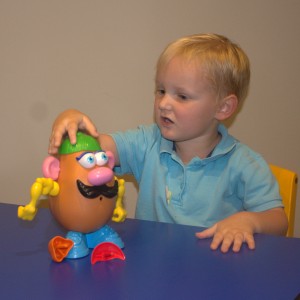 Some of the types of play that children experience include:

Sensory and locomotor play: This develops motor skills as well as strength and coordination and also provides excercise. It includes tasks such as puzzles, threading and craft actvities as well as running, skipping, climbing and exploring playground equipment.

Object or construction play: This inlcudes construction activities such as blocks and also objects such as doll and car play which develops into pretend play.

Language play: Children vocalise and chat to themselves.

Pretend play: Otherwise called symbolic play or fantasy play. Children pretend that an object or action is something else, such as a doll being a baby, or climbing a tree is exploring a jungle.

Socio-dramatic play: Pretend play with others. This play is particularly important for developing social skills, higher level language and thinking skills. It might include playing "families" or "schools" or acting out roles such as pirates or princesses.

The development of play skills:

Babies up to 10 months of age use play to explore the world around them. This includes touching, holding, shaking, throwing, banging, moving and mouthing objects. They tend to explore one thing at a time and though they enjoy common items they don't use them in the typical way, for example they may use keys for shaking and enjoy the noise they make but not try to open things with them.

Toddlers of 10 to 18 months begin to show an understanding of how objects are used and copy the actions they see others do. They may use a brush to try to brush their hair or try to put a key into a door. They may combine two objects together such as pushing blocks over with a car.

Two year olds begin to do true pretending where they imagine that things are "real" such as eating pretend food. They also begin to pretend that an object is something else such as pushing a block along, making car noises and pretending that the block is a car. They can "imagine" objects that are not there such as putting a pretend hat on a doll. They can also pretend that they are something else, such as "being" a character such as a pirate or an animal such as a tiger.

If you are concerned about your child's development, social or language skills check Our website for more information. Watch out for future blogs on developing play for different ages. Why not follow so you don't miss out.

This blog is based on information from a workshop by Alison Winkworth "Creative pretend play in language intervention" (2012) presented by Speech Pathology Australia and includes information from Paiget (1951), McClune (1995) and Nicolich (1977).

The importance of play