Posted by Talking Matters on 12 October 2013 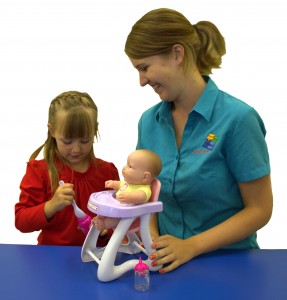 Children have an in-built need to play which begins when they are babies. Play is vital for developing language, thinking, motor skills and social skills. As children grow and develop the type of play they enjoy changes too. Providing the right kinds of play opportunities for your child's age and stage of development can greatly enhance their learning and skill development. Previously we looked at play in babies and younger toddlers. Today we will look at pretend play which begins in most children between the ages of one and two years but may develop later in some children with special needs.

Pretend play is sometimes called symbolic play or fantasy play. Children pretend that an object or action is something else, such as a doll being a baby, or climbing a tree is exploring a jungle. As children develop they begin to use socio-dramatic play which is pretend play with others. This play is particularly important for developing social skills, higher level language and thinking skills. It might include playing "families" or "schools" or acting out roles such as pirates or princesses.

Pretend play involves understanding other people. Pretending to be another person whether it is mum or dad, a baby or a ballerina, a princess or a pirate involves thinking about another person's role, how they feel and act and how they see the world. This develops a child's theory of mind. Theory of mind is a higher level thinking skill important for learning and social development which can be challenging for children with special needs to develop.

Pretend play allows opportunities to develop language, thinking and social skills. When children play together they learn to negotiate, explain, share, take turns, problem solve and respond to the comments, actions and emotions of others. 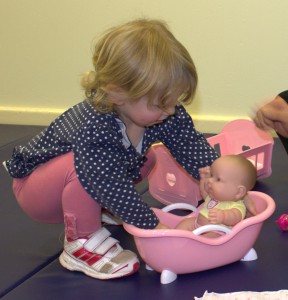 Toddlers of 10 to 18 months begin to show an understanding of how objects are used and copy the actions they see others do. They may use a brush to try to brush their hair or try to put a key into a door. They may combine two objects together such as pushing blocks over with a car but they do not yet use objects to represent something else.

Two year olds begin to do true pretending where they imagine that things are "real" such as eating pretend food. They also begin to pretend that an object is something else such as pushing a block along, making car noises and pretending that the block is a car. They can "imagine" objects that are not there such as putting a pretend hat on a doll. They can also pretend that they are something else, such as "being" a character such as a pirate or an animal such as a tiger.

Allow time for pretend play. As parents and educators we are concerned that our children learn the things that are seen as important for schooling such as letters, colours, shapes and numbers so it is tempting for playtime to become "teaching time". Allowing children to play freely is also important. Screen time takes up more and more of a child's day so make a regular time to turn off the TV, iPad and computer and allow your child to play.

Provide materials for pretend play. Pretend play toys can be inexpensive. You don't need to buy the worlds best cubby house or a ride on motorised sports car. A cardboard box can be both a cubby and a sports car for free and tomorrow it can be something else.

For more ideas about cubbies, dress-ups and playing shops check this previous post.

Pretend play can allow your child to develop valuable skills and build treasured memories for you both. Don't forget to record some with photos or video to discuss and share when the playing is done!